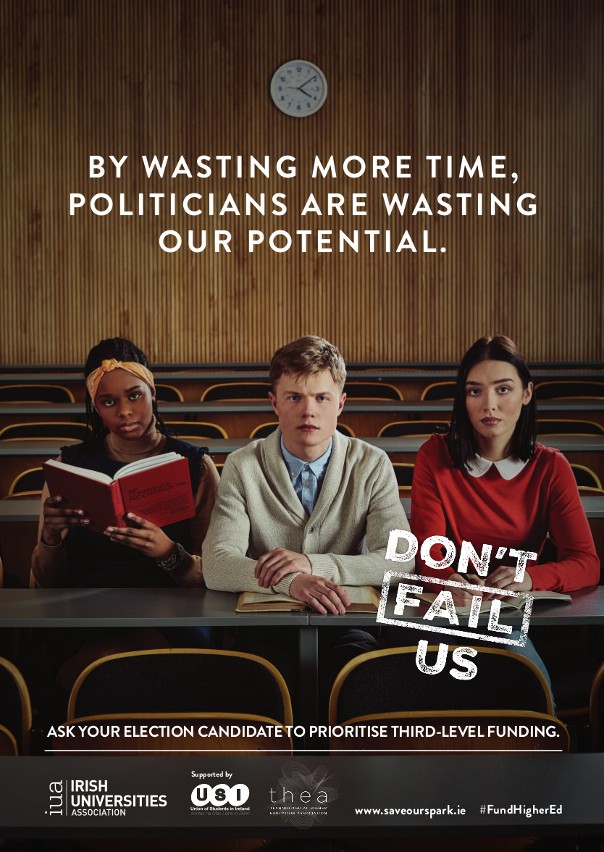 Higher education stakeholders unite to campaign for investment in the sector

For the first time the representative bodies for the public higher education system – institutions and students - have united under a single cause. The IUA, THEA and the USI - representative bodies for universities, institutes of technology and students - have come together to make the case for investment in higher education by the next Government.

State funding per student to third level institutions is now 40% less than it was a decade ago.  Every year, Ireland is losing ground against international competitors and the crisis in funding is compromising the quality of the higher education system and the student experience.

The representative bodies have begun a series of meetings with education spokespersons of all the major parties followed by social and online advertising to encourage staff, students and parents to ask their candidate to prioritise funding higher education in this general election. In addition, the Royal Irish Academy along with IUA, THEA and USI will host a debate on the future of Irish higher education and research funding on Tuesday January 28th at Trinity College Business School.

To make up the funding shortfall, the representative bodies are proposing a two-part solution for the next three years until a longer-term funding model is agreed by the political system.

Part one involves a commitment from the next government to increase core exchequer funding to third-level by at least €100 million per year over each of the next three years.

Commenting on the situation, Jim Miley, Director General, Irish Universities Association said: “After almost four years, the options identified by Cassells have been referred to an EU-funded study group for further analysis and recommendations. Realistically, we will have to wait until late 2020 to get a ‘Report about a Report’. It will take a further year or more for the political and civil service system to act. We just cannot wait that long. In an increasingly competitive global environment, Ireland’s talent is our future.”

While there has been minimal extra funding provided in recent years, Dr Joseph Ryan, Chief Executive of the Technological Higher Education Association (THEA) pointed out that: “The NTF was established with the singular purpose of supporting our national higher education and skills training requirements. It is unimaginable that such a Fund surplus would be allowed to sit in a government bank account while the crisis in third level funding continues apace.  The stark fact remains that the core funding provided by the State to third level institutions and universities is now 40% less than it was a decade ago. This is at a time of unprecedented growth in the student population and we know that numbers will increase by at least 36,000 or one fifth over the next decade.  As we face into a General Election, we are calling on all parties who hope to be part of the next Government to commit to this sustained investment in higher education”.

As candidates around the country knock on doors, Lorna Fitzpatrick, President, Union of Students in Ireland asks them to remember that: “Collectively, the staff and student community at third level is close to 300,000 people, perhaps double or treble that when their immediate families are taken into account. We say to our politicians and election candidates – these are people living and supporting your local communities. And we say to those people themselves – ask your election candidate to commit to addressing the crisis in third level funding when they ask for your support. It is nothing less than your future and that of your family that is at stake.”