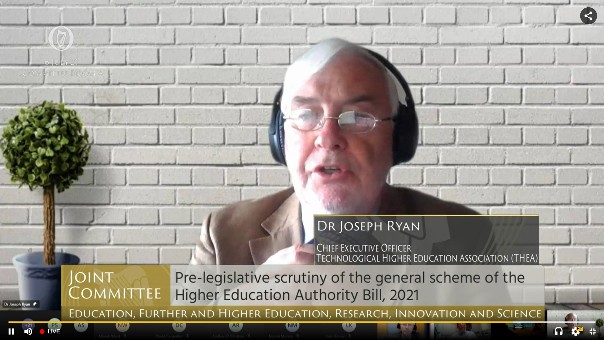 THEA broadly welcomes the ambition of the new legislation and made a number of recommendations and observations during the opening statement.  The full statement can be found here DOWNLOAD

THEA expressed the view that it is not only possible but advisable to work collegiately while retaining respect for the statutory functions.  In reference to the shared approach, THEA pointed to common objectives throughout the higher education sector, including:

THEA raised the question as to whether a regulatory agency can also be a fostering body and advised that the relationship between the HEA and the Department of Further and Higher Education Research Innovation and Science (D/FHERIS) should be carefully documented, as there is the danger of perceiving the HEA as an extension of the D/FHERIS.

THEA noted the proposed shared governance model, which separates the corporate, executive, and academic strands, and questions what lies within the competence of any given strand.

While welcoming the intent informing the proposed reduction in the size of governing authorities, THEA cautioned against an overly reductionist approach, arguing that:

In addressing the role of the HEA in relation to research, THEA advised that the HEA’s role should be aligned with the role of the D/FHERIS in research policy, and that it would be beneficial for the Irish Research Council to have increased autonomy.  This would allow the Council to align better its resources and systems with its mandate, putting arts, humanities, and social sciences research on an equal statutory footing.

THEA also noted that the Technological Universities Act references the role that the HEA has in formulating rules to be complied with by a technological university in relation to any borrowing, guaranteeing, or underwriting and requested that the new legislation support this ambition.

In conclusion, THEA stated that achieving balance between respect for institutional autonomy and requirement for accountability instruments will be the test of the legislation.

Dr Joseph Ryan, CEO of THEA stated “We have been very happy to work with our colleagues in the HEA and in the D/FHERIS toward shaping a collective vision of the new role of An tÚdarás which will see the higher education landscape through enormous changes in the short term.  We trust that the diversity, which is at the heart of the higher education system, will be respected and prioritised as institutions establish their identity in the regions which they serve.  We are on track to see at least three new technological universities designated in the coming months and look forward to working with them and our existing institutions to re-shape the higher education landscape for future generations of learners.”