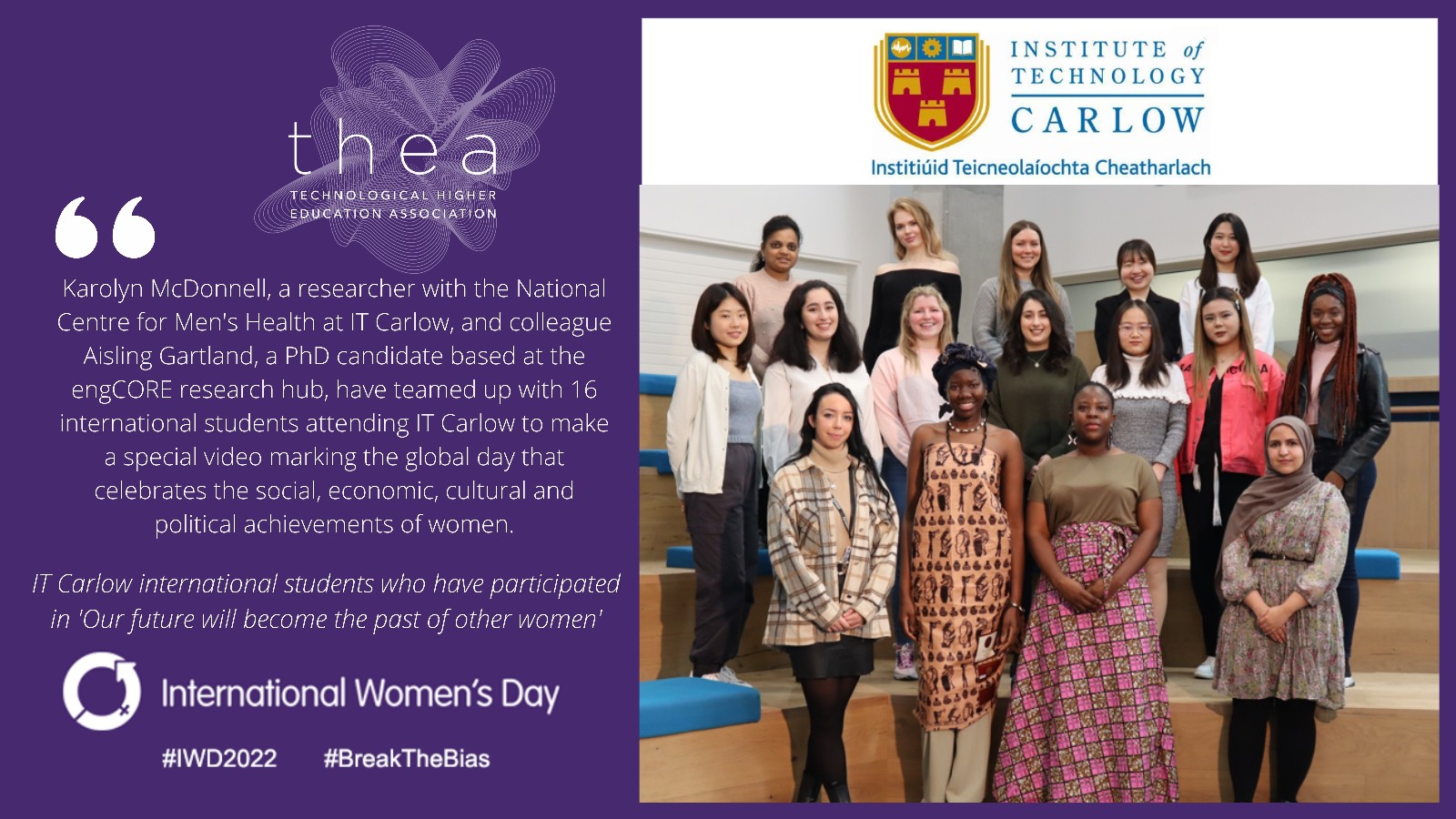 Two IT Carlow staff have imagined and executed a very special initiative featuring IT Carlow students from around the world to mark International Women’s Day 2022, taking place on Tue. 8 March.

Karolyn McDonnell, a researcher with the National Centre for Men's Health at IT Carlow, and colleague Aisling Gartland, a PhD candidate based at the engCORE research hub, have teamed up with 16 international students attending IT Carlow to make a special video marking the global day that celebrates the social, economic, cultural and political achievements of women.

The cultural initiative, entitled Our Future will become the Past of Other Women, is inspired by the poem of the same name written by the late Hon. MRIA Eavan Boland (1944-2020) to mark 100 years of suffrage in Ireland. Information on this literary work is available here https://www.irishtimes.com/vote100/eavan-boland-poem

The Suffragette movement in Ireland secured a woman’s right to vote and the first ballot was cast on 14 December, 1918. International Women’s Day has a strong connection with women’s suffrage where, prior to the IWD movement, only the American Socialist Party and Suffragettes in the UK and Ireland were campaigning for women’s equality.

Working as a team, the 16 international students have translated different lines of the poem into their own language and have created a video, which will be launched on International Women’s Day next week.

Karolyn McDonnell, of the National Centre for Men’s Health in IT Carlow devised the project and described how the project is underpinned by two important themes concerning women.  “This poem by Eavan Boland marks 100 years of one of the greatest human rights achievements in Ireland, and recognises that not all women in the world enjoy the same rights and freedom that Irish women do. The project also celebrates the international diversity of the student community in IT Carlow who make an invaluable contribution to our learning experiences and campus life”, she said.

Co-organiser Aisling Gartland, a PhD candidate in engCORE in IT Carlow highlights how notable the project is.  “The words  of this poem celebrating Irish women’s incredible achievement for suffrage are spoken in these international languages,  in some cases for the first time ever, symbolising the solidarity of women across the world in efforts to achieve equality”, she commented.

Produced by Greg Mynhardt of Hedgehog Productions, the video will be launched at an event on Tuesday 8 March where staff and students will come together to mark the day and celebrate equality, inclusivity and diversity as a shared ethos across IT Carlow’s campuses. The video will be shared on social media afterwards to celebrate International Women’s Day.

A special word of thanks is extended to Rachel Ní Neill and Laura Brennan of the International Office in IT Carlow who supported and encouraged the women to participate, and to the Equality Diversity and Inclusivity Committee for their organisation, sponsorship and championing of the project.

This International Women’s Day, we look forward to hearing our international students recite the words of Eavan Boland in many languages:

If we could only summon

Or see them these women,

Foremothers of the nurture

And dignity that will come

To all of us from this day

We could say across the century

To each one—give me your hand:

It has written our future.

Our future will become

The past of other women.