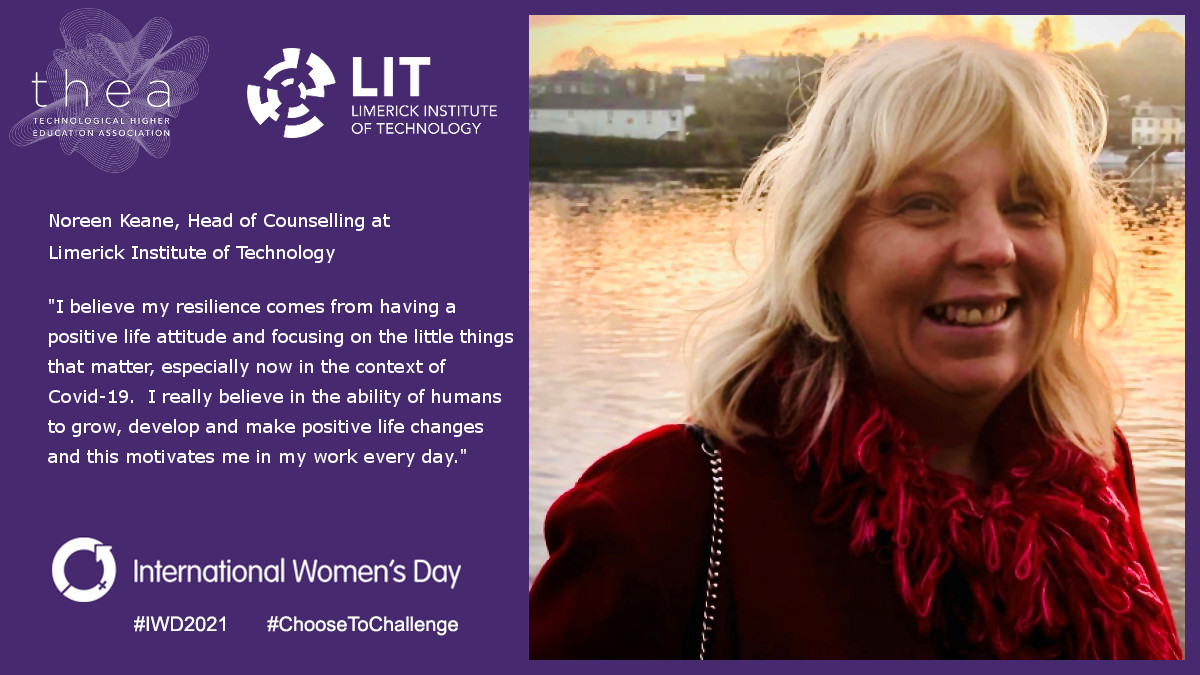 Noreen Keane is the Head of Counselling at Limerick Institute of Technology.

A Counselling Psychologist, Psychotherapist and Supervisor, Noreen has almost three decades of extensive experience in counselling and psychotherapy in further and higher education.

She is a Chartered Psychologist and Associate Fellow of the Psychological Society of Ireland, and an accredited counsellor, psychotherapist and supervisor with IACP (Irish Association for Counselling and Psychotherapy).

A natural leader who has managed, developed and transformed the Student Counselling Service in LIT for more than 16 years, Noreen manages a core team of six student counsellors, along with seven interns and two trainee counsellors.

In her role as Head of Counselling at LIT, Noreen also draws on her experiences beyond the Institute of Technology’s five campuses. She is one of the lead drivers nationally with Psychological Counsellors in Higher Education in Ireland (PCHEI) and the Heads of Student Counselling PCHEI.

Her excellent communication and relational skills have never been more important as now, as she works with her team to help LIT’s students navigate the many challenges and upsets caused by the current pandemic. Extremely driven and hardworking Noreen has ensured that all students who require support have a place to go, an ear to hear and a hand to help.

In life beyond Higher Education Noreen remains a strong advocate of children and young people with disabilities. In 2013, she mounted a campaign to return discretionary medical cards to children with disabilities and life limiting illnesses and conditions.

She is also a very active member of Down Syndrome Limerick, having served on the committee and also as chairperson for eight years.  This is an area close to her heart, as she has a son, Ronan, with Down syndrome.

Originally from Charleville, in County Cork, Noreen is a graduate of University College Cork. She moved to work in Limerick in 1997 and currently resides in Clonlara, a village in the neighboring county of Clare.

Noreen attributes her resilience to having a positive life attitude and focusing on the little things that matter, especially now in the context of Covid-19.  Her belief in the ability of humans to grow, develop and make positive life changes is what motivates her in her work. Family and relationships are extremely important and Noreen never underestimates the importance of fun and a good sense of humor no matter what life might throw at her.

“I believe my resilience comes from having a positive life attitude and focusing on the little things that matter, especially now in the context of Covid-19.  I really believe in the ability of humans to grow, develop and make positive life changes and this motivates me in my work every day.”