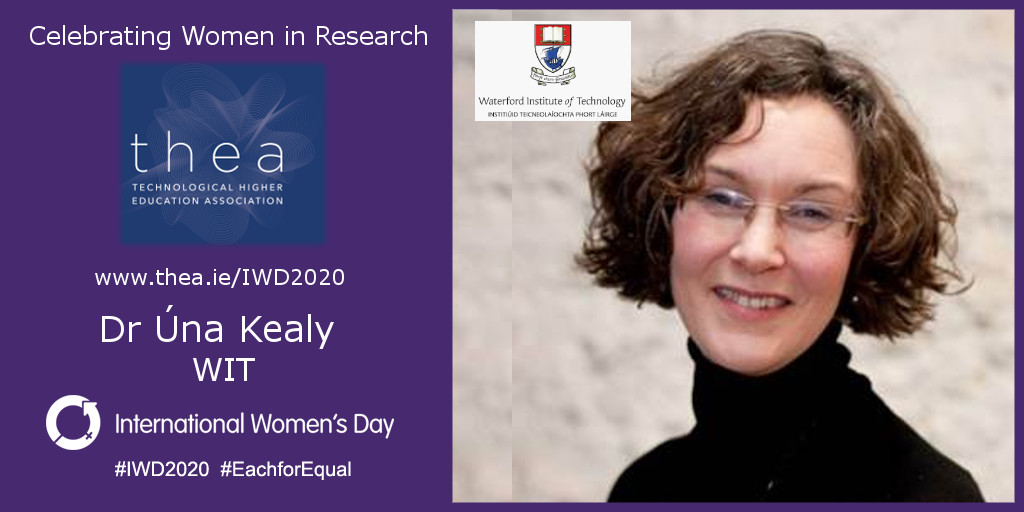 International Women's Day 2020: Dr Úna Kealy is a Lecturer & Principal Investigator in the Department of Creative and Performing Arts, School of Humanities, Waterford Institute of Technology

Úna works part-time in WIT and is mother to three children. Balancing family life with a part-time job and undertaking research is, she freely admits, something of a team effort. When asked to explain Úna says “Too often we read biographies of women who seem to have achieved wondrous things, all under their own steam, but my achievements, in recent years in particular, are the result of the unfailing support and encouragement of two key people: my partner Dr Mick O’Meara and my dear friend and colleague Dr Kate McCarthy, together they have supported and contributed in many different ways to my professional achievements”.

Úna’s research outputs are frequently, the result of a professional collaboration, in WIT with colleagues Dr McCarthy and Dr Richard Hayes. Describing these collaborative working relationships Úna asserts “We initially co-wrote funding applications, doctoral projects, project outlines, conference CFPs, book chapters and academic articles as an expedient way of getting as much as possible achieved in the limited time we had available”. However, the practice of co-authorship, which began as an expedient way of working, has evolved in partnership with Dr McCarthy, into a conscious feminist research practice. On the subject of feminist co-authorship Úna says “Kate and I have adopted co-authorship as a means of enhancing our critical engagement with the work that we undertake and that way of working definitely benefits the students we support”. She adds “It helps that Kate and I are great friends—working collaboratively gives us time together that is enjoyable and fulfilling. We both have young families and we have a tacit agreement that the time we take from our personal lives to progress our research must be as precious and worthwhile as the time we spend with our families”.

Úna is a principal investigator within the WIT research group entitled Performing the Region. Her research activities include the publication of academic articles and book chapters; supervision of research postgraduate students; an intergenerational community transcription and research project; rehearsed readings of dramatic texts; and supporting the translation of dramatic texts. These activities, in different ways, seek to critically examine the dramatic work and the place of playwrights and practitioners from the south east of Ireland within the narrative of Irish theatre while also considering the contribution made by women to this narrative.

Úna has contributed to discussions on the topic of Irish women playwrights within both local and national media and also to the WIT English and Theatre Studies podcast series The Nerve. She actualises her commitment to disseminating the research in which she is engaged beyond academia by designing and delivering public lecture series regionally. For the Wexford County Library Service Úna has delivered two public lecture series entitled ‘Portraits of the Artist as Young Women’ (2019) and ‘Literature of the South East’ (2018). She delivered a public lecture series on playwright Teresa Deevy (2015) in WIT and has delivered lectures for the University of the Third Age, Waterford Writers’ Weekend and the Julian Walton Lecture Series. In May this year Úna will deliver a public lecture on Teresa Deevy’s one-act play, The King of Spain’s Daughter, as part of the Bealtaine Festival programme.

Úna is committed to her work as an educator: in 2015 with Dr Kate McCarthy, she won the WIT Teaching Excellence Award and in 2018 Úna won the WIT Supervisory Excellence Award. In 2018 Úna was invited by the Centre for Technology Enhanced Learning (CTEL) to share her approach to designing and curating her modules within WIT’s VLE with colleagues and to contribute to the WIT CTEL podcast series her approach to using Moodle within a flipped classroom environment.

Úna currently lectures in Theatre Studies and English at WIT, prior to this she worked in professional theatre as a company, venue and festival manager, workshop facilitator and dramaturg. For further details of Úna’s research see: www.wit.ie/about_wit/contact_us/staff_directory/una_kealy